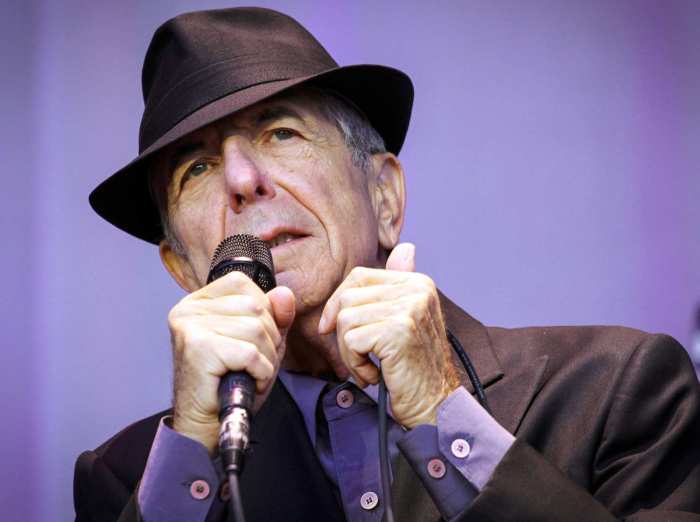 Leonard Cohen passed away just a month ago. Those were sad news added to many other sad news we have had along the year and to the destabilizing results of the last USA elections. I wanted to honor him with a brief post right away after his death, but as Lennon wrote, “Life is what happens to you while you’re busy making other plans,” and for several unnamed reasons I was caught in a dumb mood, unable to do anything but wandering all around from one place to another. But it’s time now to tell something about and I don’t want to miss the chance, so here they come a few words in memory of the great singer/songwriter, meaningful visionary of the last century. I believe Leonard Cohen was the sweetest deeper songwriter of the popular music. Bob Dylan might have been the greatest storyteller of Rock’n’Roll, maybe even the most striking of the lyricists, but the greatest poet beside him, only one who could have shadowed Dylan once in a while, will always be Leonard.

From “Songs of Leonard Cohen” album I choose “Sisters of Mercy” as one of the most representative songs of what I consider the magic and mystery behind Cohen’s lyrics, spreaded through his voice and intoxicating music. It was used as part of the soundtrack in the 1971 Robert Altman film “McCabe & Mrs. Miller.” This is a live version of the song:

Oh the sisters of mercy, they are not departed or gone.
They were waiting for me when I thought that I just can’t go on.
And they brought me their comfort and later they brought me this song.
Oh yes I hope you run into them, you who’ve been travelling so long.

Yeah you who must leave everything that you cannot control.
It begins with your family, but soon it comes around to your soul.
Well I’ve been where you’re hanging, and I think I can see how you’re pinned:
When you’re not feeling holy, your loneliness tells that you’ve sinned.

Well they lay down beside me, I made my confession to them.
They touched both my eyes and I touched the dew on their hem.
If your life is a leaf that the seasons tear off and condemn
Oh they will bind you with love that is graceful and green as a stem.

When I left they were sleeping, I hope you run into them pretty soon.
Don’t turn on the lights, you can read their address by the moon.
And you won’t make me jealous if I hear that they sweetened your night:
Ahh we weren’t lovers like that and besides it would still be all right.

Leonard Cohen himself has told many times the story about the two girls who inspired him this song. Rolling Stone magazine website published this article: “Watch Leonard Cohen Read Surreal Poem in Animated Interview” including the video in which the singer-songwriter reads his surreal poem “Two Went to Sleep” and tells the bizarre origins of the folk classic “Sisters of Mercy.”

Here is a link to the story Roz Warren wrote many years later, oddly talking about a similar encounter to the one described in the song she and her friend had with the artist in 1975: My Night With Leonard Cohen.”

Another Cohen’s song I wanted to mention is “Leonard Cohen’s Elegy For Janis Joplin – Chelsea Hotel #1” since it contributed to the legend of the famous Chelsea Hotel in New York. The song, later to become “Chelsea Hotel #2,” was dedicated to Janis Joplin. It was written at the hotel after the affair they had when they met each other in the elevator, according to Leonard Cohen. Later at some point he declared that he ever regretted to have exposed the name of her related to that song.

Many artists, musicians and writers visiting the hotel made of it a cultural and artistic center of the bohemian world in New York. Regarding the Chelsea Hotel, also Bob Dylan wrote some revealing lines on “Sara,” the last song of his “Desire” album. This is what the lyrics said:

I can still hear the sounds of those Methodist bells
I’d taken the cure and had just gotten through
Stayin’ up for days in the Chelsea Hotel
Writin’ “Sad-Eyed Lady of the Lowlands” for you.

To finish up this remembrance of the incredible Leonard Cohen, I didn’t want to leave out this unforgettable speech he gave at the Principe De Asturias Awards ceremony (Prince of Asturias Awards,) so here it comes for all of you to watch and listen to:

50 thoughts on “Sisters of Mercy”